In a male-dominated comedy scene, a Latina struggles to make her mark. On stage, she breaks through by imitating the strong women in her family, unwittingly bringing them into her stand-up comedy adventure.

Más Latina starts with Gabi, a thirty-something tomboy struggling to tell a decent joke at an open mic and ends with her finding her voice on stage in her first show.

By imitating the strong Latinas in her life, she arrives. But first, she dodges a love connection to stay on track and then has to reveal her passion to her judgmental family. Unlike many immigrant family stories, in the end, Gabi's mother Consuelo is happy to see her going after her dreams. This pilot sets the stage for future episodes wherein Gabi's family will support her stand-up comedy adventure to chaotic effect. 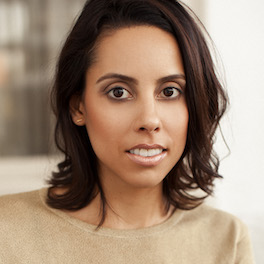 Janeva Adena Zentz is an emerging Latine writer and director. She is the daughter of a Guatemalan immigrant, and she is a resourceful artist who proudly creates outside of the box. Her filmmaking journey began when she starred in the magical realist feature film La Voz de Los Silenciados. The film won awards around the world, and Zentz received a Best Actress nomination at The Mumbai International Film Festival where she was called "the Guatemalan Shelley Duvall." After this incredible introduction to acting, Zentz studied improv and stand-up comedy, which led to her discovering a love of screenwriting.

Since 2018, she has been developing the off-beat comedy series Más Latina, which combines her cultural background with her comedic strengths. Zentz wrote, produced, acted in, and directed the pilot. The rough cut won Best Pilot in Progress at SeriesFest 2021.

Tim Young is an award-winning filmmaker and a graduate of the Film & TV Program at NYU. His projects have been featured by The Huffington Post, The Wall Street Journal, and the front page of Funny Or Die.

He has directed comedy shorts and web series, including an episode of Broad City and the short film "Bonding," which premiered at IFF Boston in 2016. His scripts have been accepted into the Austin Film Festival and Oaxaca Film Festival.