PRESENTED AS PART OF THE FORETOLD CHRONICLES PROGRAM:
Eagles, At Last, Estilo Americano, No Thank You, Water, With His Eyes Closed, Worry Dolls

PRESENTED AS PART OF THE ROOTS SHORTS PROGRAM:
Eagles, In Case I'm Next, Malinchista, No Thank You, Water, With His Eyes Closed, Worry Dolls

With His Eyes Closed

In the city of Miami, Andres and his younger brother Miguel are living under the control of their abusive father. After Andres decides to skip school, his seemingly adventurous escape brings unexpected consequences. However, this experience gives him the courage to fight back against his father in a fearless attempt to protect his younger brother. 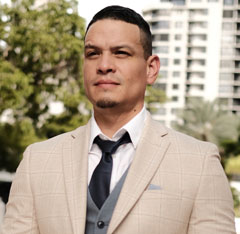 Jose Navas is a Writer/Director born in Nicaragua and raised in Miami. He studied film at the Miami International University of Arts and Design before founding the production company, FlickHouse Studios. Navas's feature documentary debut was Miami Our City (2016). He co-wrote, directed, and produced the award-winning short film "El Balsero." His work has been supported by the Knight Foundation, Sundance Institute, PBS, and NALIP. His most recent film, Beat Lingo, made its world premiere at the 38th Miami Film Festival.