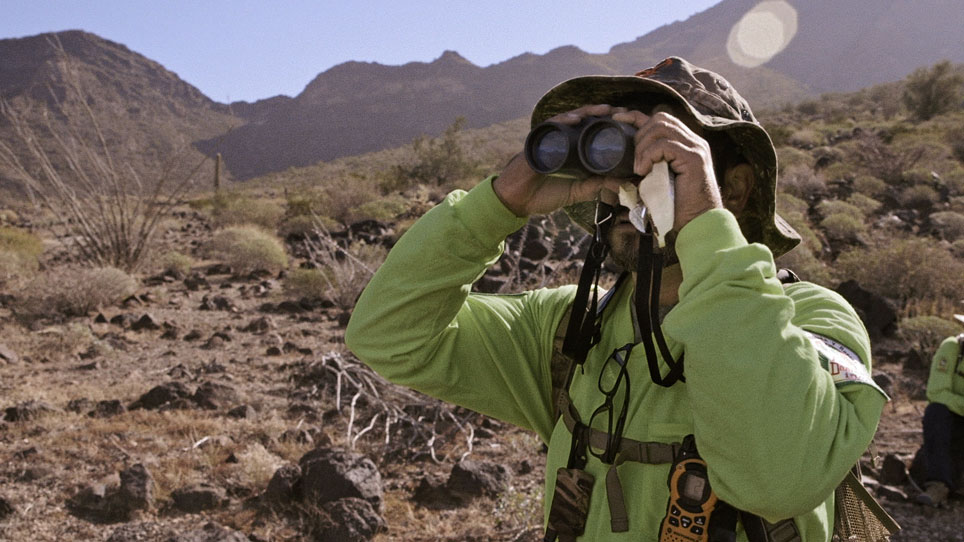 In these hostile and treacherous lands, every bone has a story.

Along the southern desert border in Arizona, it is estimated that only one out of every five missing migrants are ever found. Águilas is the story of one group of searchers, the Aguilas del Desierto. Once a month these volunteers—construction workers, gardeners, domestic laborers by trade—set out to recover the missing, reported to them by loved ones often thousands of miles away. Amidst rising political repression and cartel violence, as well as the eternal difficulties of travel in the Sonoran Desert, the Águilas carry out their solemn task. Águilas lays bare the tragic reality of migrant death by venturing deep into the wilderness of the borderlands. The desert is a vast cemetery where the bodies and dried bones of migrants lie exposed under the scorching sun. In a world where efforts to humanize the migrant experience often get lost within the statistics and headlines, this documentary provides an observational and poetic response to one of the most pressing issues of our time, undocumented immigration and the hardships of the border crossing experience.

Kristy Guevara-Flanagan is an Associate Professor at UCLA’s School of Theatre, Film, and Television, where she heads the MFA Directing Documentary concentration. She has been making documentary films that focus on gender, death, and the Latinx community for nearly two decades. Guevara-Flanagan’s documentary and experimental films have screened at the Sundance, Tribeca, SXSW, and HotDocs film festivals and the Getty Museum. Her work has broadcast on PBS and the Sundance Channel, received numerous awards, and been funded by ITVS, the Sundance Institute, Fork Films, the IDA, the Tribeca Institute, Latino Public Broadcasting, and California Humanities. Her films are currently in distribution with Women Make Movies.