Bodies Will Tumble And Roll

When a dysfunctional BIPOC cheer squad are sent to the woods to settle their differences, they must learn to become a team to save their coach from serial killers.

A group of teenage BIPOC cheerleaders flood into a cabin in the woods to sort through their issues but before they can even unpack a full on fight breaks out. Coach Angie puts them in their place reminding them they are here for one reason and one reason only - to become a team.

Chaos ensues when the coach goes missing and the squad finds themselves alone, in the woods, with no help and to make it worse - having creepy killers down the road as neighbors. They will need to learn to work together in order to save their coach and become the leaders they are meant to be in this action packed comedy, thriller. 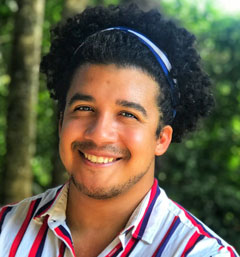 Eli Vazquez is a Los Angeles based writer, director. A proud afro-Mexi-Rican from Chicago, Eli is the oldest of 10 siblings and disappointment to his mother who wanted him to become a priest.

A former director for BuzzFeed Studios and their Latinx digital brand Pero Like, where his work generated over a billion views online. Eli also is the founder/creator of Hype Media House, a digital collective producing inclusive BIPOC creative projects. In 2018 he became a fellow in the HOLA Mexico Film Festival’s, Tomorrow’s Filmmakers Today program, he is a 2021 NHMC TV Writers Fellow and a 2022 LALIFF/Netflix's Afro-Latinx Film Fellow. Eli’s projects have been seen at such festivals as the Chicago International Latino Film Festival, Philadelphia Latino Film Festival, Los Angeles Latino International Film Festival and most recently nominated for multiple awards at the Official Latino Film and Arts Festival.